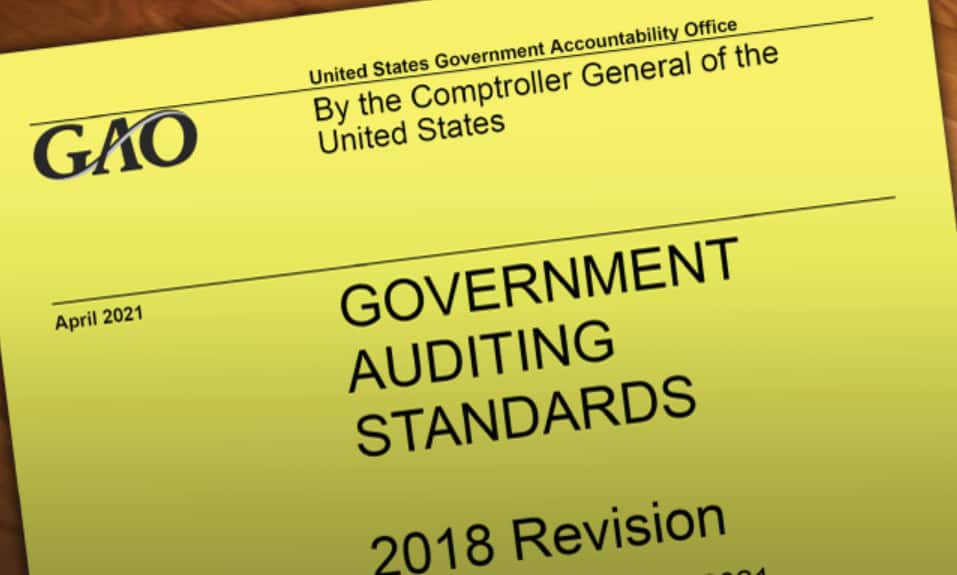 The yellow book is a rule book that has all the rules and standards to conduct auditing in the public sector, which is published by Government Accountability Office of the USA. All the newest standards and updates of rules are written in it that help the governmental auditors and the CPAs to conduct audits with these rules.

It includes both the financial and the performance audit guidance in it. Some of the audit standards, that are essential for Auditing Yellow Book, are independent of a business, and how it takes care of it, supervision, CPE, and control. These are some of the main audit standards that are seen.

This Auditing Yellow Book is also called GAGAS, generally accepted by government auditing standards of audits by a lot of people. You must be wondering why the yellow book?

Use and Application of GAGAS

There are all the rules when conducting an audit in the public section, as published by the CAO of GAGAS in the yellow book. Chapter 1 of the recently-updated Auditing Yellow Book states that all the audits conducted must have attestation engagements and must be high-quality government audits.

These audits must have independence, objectivity, and integrity with competence so that they can provide a good framework.

Furthermore, the yellow book recent updates also say that the GAGAS has all the required guidance and requirements in it, including ethics, professional competence, independence, quality control, judgment, and reporting.

Performance audits are made based on sufficient evidence, and the reporting, conclusions, and assurance. Performance audits also help to provide objectives to those charged with the governance, so that they can use this information and improve their programming performance, and take corrective actions.

For the performance audits conducted by the IROs, the Auditing Yellow Book recently updated states that other few standards too should be utilized by the auditors along with the GAGAS.

There are standards for educational and psychological testing, guiding principles for evaluators, program evaluations standards, and international standards for the professional practice of internal auditing.

There are new standards issued to the accounting and auditing bodies, that ‘any audit must be conducted according to the original standards’ to implement them. These new standards are called PSUs or professional standards updates. These updates help to inform all the yellow book auditors about the changes, but it doesn’t reflect any views of GAO officials on them.

In yellow book chapter 8, all the information of the reports, like the form of reports, contents, a reason to issue the report, and distribution, is set forth. Along with the IRO report issuance, the proper evidence must be provided for the conclusion and findings to support them, and this is a must-to-have.

The GAO recently released some new versions of the Auditing Yellow Book standards of the government. The yellow book has been reorganized and a new version has been made that aims to make things easier for the auditors with professional standards. The new standards have evaluated the threat to the independence of auditors.

The revised version of the GAO, yellow book was made in July 2018, in which new important regulations were made that should be known by all the auditors performing audits under the statements of GAS. There is other information too that will help the CPAs and prove to be valuable.

The yellow book 2018 is said to be going into effect after JUNE 30, 2020, and the performance audit on 1 July 2019. Auditors must consider these rules when making a judgment, not before the due date as early implementations are not allowed, about the non-audit impact on the services with independence. Read below to understand further.

If the auditor is conducting the single audit of the federal awards then it must be conducted under the OMB’s uniform guidance along with the GAS. Many audits do not follow the GAS as all the rules and regulations in the UG of OMB are so detailed. There are other places too where GAS must be followed like a not-for-profit company makes any request in its local agencies or various states like HUD.

Those CPAs that are familiar with the 2011 version of the yellow book will see a huge difference in the Auditing Yellow Book that is recently updated as compared to the old one.

The appendices of the 2011 yellow book have changed to chapters in the yellow book 2018. Now, requirements and guidance are written on the box that has all the related applications and it has made a lot of things easier for the auditors. One of them is that it has helped to find rules when someone is performing research or conducting an audit.

The standards have two categories that are required, one is ‘must’, or mandatory for a reporting, and the other is ‘should’ that you can skip if you want, but then you have to give the reasons why the auditor didn’t perform them, and what in place of it was performed to give similar reporting and results.

The ‘must’ is a self-explanatory word that states some of the procedures that auditors must take while performing a procedure. This only occurs on rare occasions, not always. Only then when the auditor thinks that these presumptively mandatory requirements are not necessary, but even then he has to give the reason why leaving these would not affect the procedure.